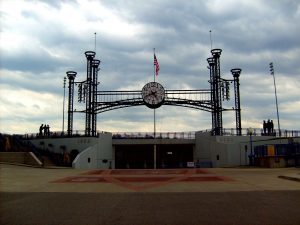 Lawrenceburg is located in Dearborn County, Indiana. The city is the county seat and largest city in the county. The town sits on the picturesque Ohio River, just west of Cincinnati, OH.

The area containing today’s city of Lawrenceburg began to be settled late in the 1700s by westward-moving settlers using flatboats on the Ohio River. The river played a major role in the early development of the city prior to the 1820s when other means of travel began to develop such as a road, railroad and a canal.

These early settlers were mostly American-born families from eastern states such as Pennsylvania, Maryland and Virginia, later to be joined after the 1820s by an influx of European immigrants from Germany and Ireland. This wave of immigration was a major source of settlers along the Ohio River as the forests, hills and rich soils reminded the newcomers of similar lands back in Europe.

Becoming the Dearborn County Seat
By 1803 Lawrenceburg had attained enough status among the local communities to become the Dearborn county seat. Today’s Dearborn County Courthouse was constructed in the years 1870 and 1871. Two other courthouses preceded the current structure. The building is a beautiful example of neo-classical architecture which was a popular style throughout 19th century America.