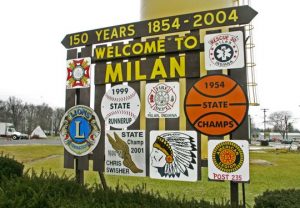 Milan is a quaint town in Franklin and Washington townships, Ripley County, Indiana. Milan was laid out in 1854 when the railroad was extended. The town, like its predecessor Old Milan, was named after Milan, in Italy. A drive through the quiet neighborhood of Old Milan gives few clues that it was once the bustling center of trade at the crossroads of the Brookville-Madison and Aurora-Napoleon routes.

Milan High School won the Indiana state basketball championship against Muncie Central High School in 1954, the victory being significant as Milan was one of the smallest towns to win a state championship in the United States at that time. The 1986 film Hoosiers is based on the story of the 1954 Milan Team.